Office property markets across the CEE region demonstrated an improved occupier demand and rental dynamics during Q1 2022. The occupier’s activity continued recovering: the aggregate total take-up increased by 81% y/y and 38% q/q, while net absorption was positive in all the cities in focus.

Development activity in the office sector demonstrates differing dynamics across the CEE: Although it slowed down in Bratislava, Bucharest and Sofia, the office delivery pipeline remains significant in Warsaw and Prague, and Budapest expects a record high annual supply in 2022.

The aggregate new supply figure for the CEE capitals in Q1 2022 increased by 10% y/y and more than doubled compared to the previous quarter. Significant development activity in the office property sector resulted in increased vacancy. The overall vacancy rates in the office property markets in the CEE capital cities in Q1 2022 exceeded the Q1 2021 figures. Over the past quarter, the office vacancy slightly softened in Sofia and Warsaw, but it increased in other cities compared to the previous quarter’s value.

Prime office rents kept stable across the whole region, except for Prague and Warsaw, which witnessed rental increases during Q1 2022. In the short term, further upward pressure on headline rents is expected in the CEE given rising construction and fit-out costs.

The industrial property market continues actively developing across the CEE region, fuelled by a robust occupier demand for warehouse space, mainly from retail transformation and rapidly growing e-commerce, and the investors’ confidence in this asset class.

At the end of Q1 2022, the total stock of modern industrial and warehouse space in CEE reached almost 50 million sq m; about half of that (51%) located in Poland.

Development activity in the sector is high: the new supply exceeded 1.9 million sq m in Q1 2022, while over 6.9 million sq m of modern warehousing and industrial space was delivered in CEE since the beginning of 2020.

More than 7.8 million sq m is presently under construction in the region, the dominant share of which (61%) is ongoing in Poland. Notably, about 40% of such pipeline stock in CEE is built on a speculative basis, further emphasizing the positive outlook for the market.

The occupier’s activity remained robust in Q1 2022. Although the aggregate gross take-up was 23% lower compared to the historic record-high figure of Q4 2021, it increased by 4% y/y, while the 12-month rolling average shows a clear upward trend, which has accelerated since Q3 2020. 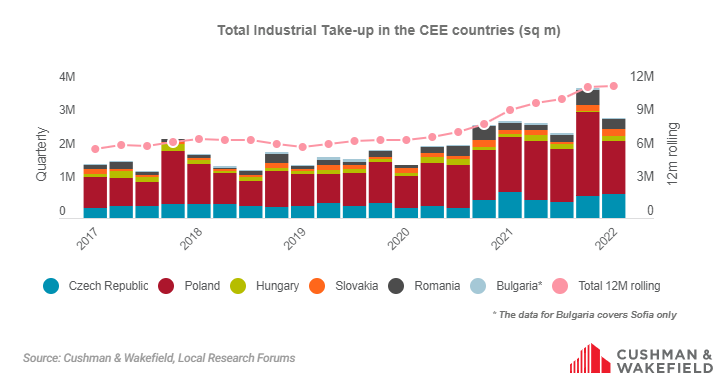 Despite significant development activity in the industrial property sector and a slight increase in vacancy in some CEE markets, the overall vacancy rates in each market stood below 6%.

Prime rents increased in all the CEE markets in the last quarter, except for Slovakia. Over the past 12 months, the steepest rental growth was recorded in the Czech Republic (+33% y/y) and Poland (+13% y/y), while in Budapest – the primary property market in Hungary, – prime rent remained slightly below the Q1 2021 level (-3%).

The majority of COVID-19 restrictions have now been lifted across the CEE. After two particularly tough years for the retail property sector, occupier demand and rental rates started recovering in many locations amid increasing footfall and retail sales. The surging inflation is the main challenge for the retail market, as it leads to erosion of the population’s purchasing power and increases service charges in the properties.

Development activity in the retail property markets in the CEE region mainly focuses on refurbishments and extensions of existing shopping centres, as well as the construction of smaller retail parks and retail convenience schemes in regional towns.

The CEE region is still attracting new brands, which announced their plans to enter the markets in 2022 – both luxury brands and mass market retailers.

In Q1 2022, prime retail rents remained relatively stable across the region with some upward dynamics in the segment of retail parks and a little room for further increase in the short term.

Retail is showing signs of greater liquidity across CEE, with investment volumes trending upwards and yield compression in some locations. 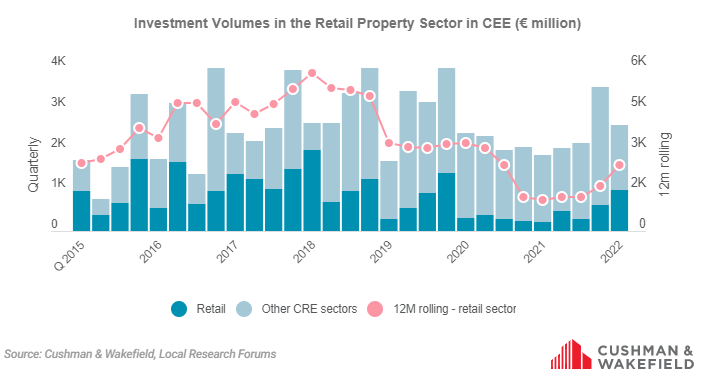 The CEE real estate investment market has been on the radar of many market watchers over the past year. But Russia’s military invasion of Ukraine, inflation uncertainty, increasing construction costs, and fast-changing interest rates have all taken their toll on the region.

Russia’s war against Ukraine has delayed some deals leading to overall smaller volumes. Despite this interrupted momentum, continuing over from Q1, we observe some liquidity returning to retail – a trend we expect to continue. The office segment accounted for almost half of the total investment volumes recorded in the CEE in Q1 2022. Commercial real estate investment transaction activity will likely remain slow during Q2 with a subdued market. Agreed deals are being closed, but they are considered “fragile” in light of the regional economic slowdown, inflation, and uncertainty.

The fragility of the CEE real estate investment market is most acute in the sector most dependent on rental growth – industrial. As rental growth continues over the coming months, we expect pent-up capital to be more easily deployed, which should boost deals in the region, particularly in the industrial sector. 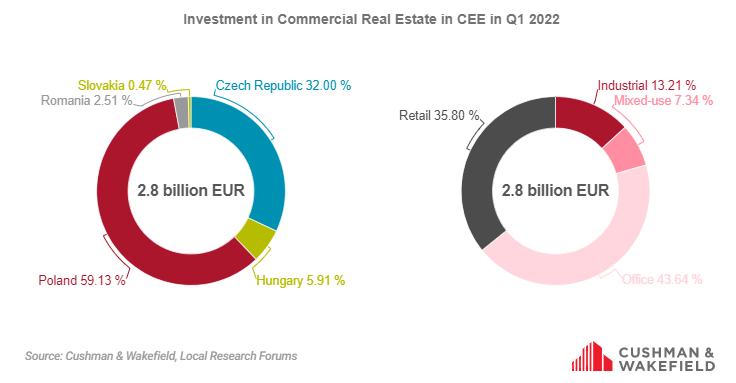 The global hotel sector continued to face pandemic-related challenges in 2021, and hotels in the CEE were no exception. While the average revenues per room (RevPAR) across the CEE-6 capitals (Bratislava, Bucharest, Budapest, Prague, Sofia, Warsaw) increased by about 43% compared to 2020, they are still notably lower than 2019 levels (-65%).

There was limited hotel transaction activity, with the total volume across the region reaching only EUR 317M, down by 78% compared to 2019. Many deals were put on hold or withdrawn, and little distress has yet been seen on the market buoyed by government support and the first sights of recovery in the second half of 2021. Investors were awaiting better visibility on the market’s recovery before making commitments. However, this conservative approach is expected to change sooner rather than later as travel restrictions have been lifted across the entire region, encouraging performance growth.

Occupancy in April 2022 reached around 60% on average across the CEE-6 capitals, and hotel room rates increased to about EUR 87 on average, nearly fully recovering to 2019 levels. 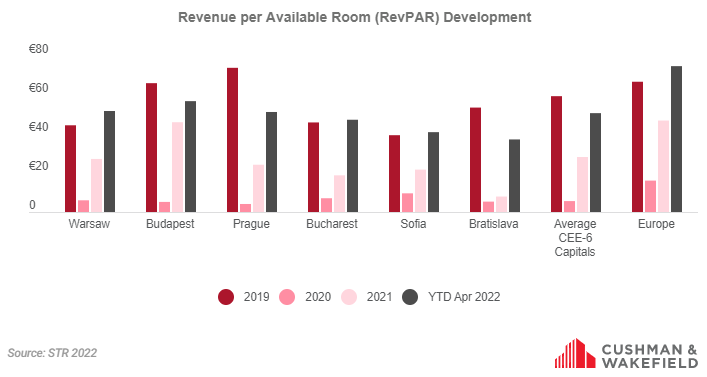 CAN’T FIND WHAT YOU’RE LOOKING FOR?

Get in touch with one of our professionals.